The observed ground motion resulting from an earthquake is the convolution of mainly three contributing factors: source, path and site effects. In order to get better insights into earthquake source physics and the attenuation of seismic waves in the Earth’s crust as well as to improve seismic hazard estimates, it is necessary to separate these contributions from each other.

For this purpose, the inversion of ground motion spectra, which is also commonly termed as the generalized inversion technique (GIT), was introduced by Andrews (1986) to separate source spectra and site amplification functions from attenuation-corrected spectra using a priori Q-models. Castro et al. (1990) introduced a two-step approach to invert for the attenuation characteristics of the Earth’s crust as well. Since then, the GIT has been applied in many regions of world (e.g. Parolai et al., 2000, 2004; Bindi et al., 2006) to unravel the frequency-dependence of the attenuation of seismic waves as well as source characteristics and site response.

These and other publications show that the technique generally works well in the case of crustal earthquake datasets. In such a case, the stations are usually well distributed around the earthquake epicenters and vice-versa, i.e. there are many crossing ray paths from sources to stations and inhomogeneities in whole-path attenuation are effectively averaged out. This is however not always the case, as a recent study by Oth et al. (2008, 2009) revealed. They applied the GIT approach to the intermediate-depth earthquakes in the Vrancea region in Romania. Here, frequent and strong earthquakes occur in a very narrow focal volume(Fig. 1 & 2). The epicentral region covers an area of only 30 x 70 km2 and the events take place in a narrow vertical stripe ranging from about 70 to 200 km depth. Oth et al. (2008, 2009) showed that in this case, the GIT formulation must be modified in order to account for lateral variability in attenuation characteristics between different sets of stations (region 1/2 , Fig. 1). Furthermore, the results show that these earthquakes depict high stress drops, leading to a very efficient high frequency radiation of seismic waves (Fig. 3) and, consequently, to a large damage potential of these earthquakes. For more information, we refer the reader to Oth et al. (2008, 2009). 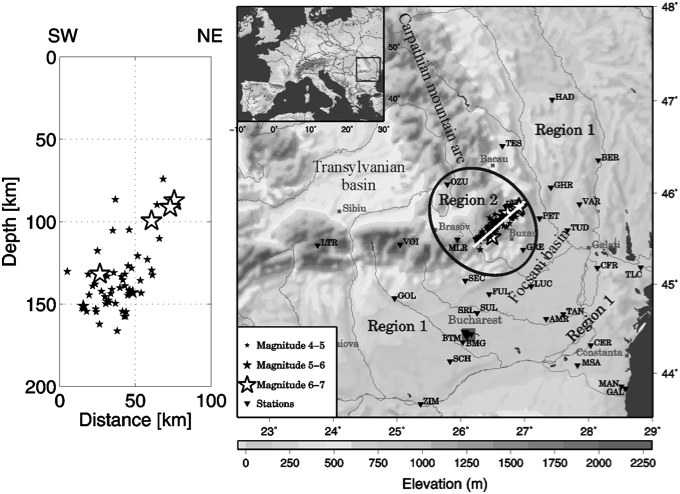 Figure 1.Map of Romania and source-station configuration. The epicenters of the utilized earthquakes are depicted by stars and the stations by inverse triangles. On the left, a SW-NE vertical cross section through the epicentral area is shown (white line on the map). Region 1 is given by the forearc area, whereas region 2 includes stations in and around the epicentral area. (Figure from Oth et al., 2008).

Figure 2. Left panel: Example records (EW components) and S-wave windows (marked by the bar above the time history) used for the computation of Fourier amplitude spectra. The origin of the time axis does not correspond to the origin time of the respective event, but has been adjusted for displaying purposes. The magnitude and hypocentral distance are given in the upper left corner. Right panel: smoothed Fourier amplitude spectra of the selected S-wave windows (Figure from Oth et al., 2008). 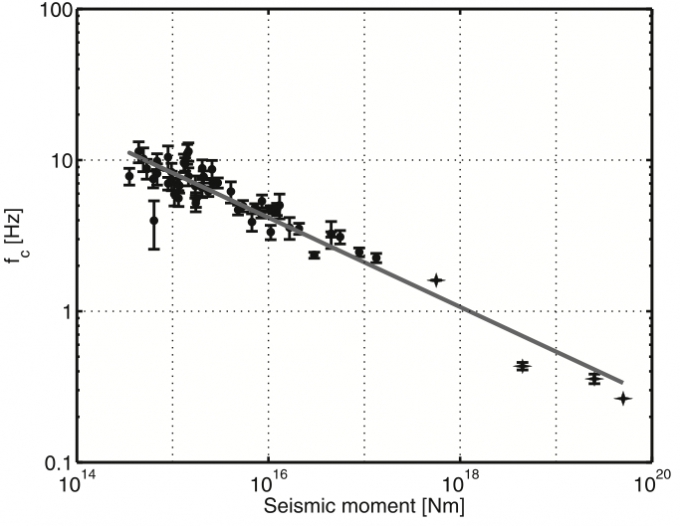 Figure 3. Corner frequency versus seismic moment. The fitted straight line has a slope of -0.3, close to the expected value of -1/3 in the case of self-similar scaling. The overall very large corner frequency values indicate stress drops of the order of 100 MPa (Figure from Oth et al., 2009).

In collaboration with researchers from the German Research Centre for Geosciences (GFZ) at the Helmholtz Centre Potsdam (Germany) and the Istituto Nazionale di Geofisica e Vulcanologia (INGV, Italy), we currently apply the GIT technique to study earthquakes that occurred in Japan during the past 13 years. In Japan, the two accelerometic network K-net and KiK-net provide the largest amount of strong motion data worldwide. These data cover a large range of magnitudes, distances and focal depths and therefore allow us to estimate stable and reliable estimates of source spectra, attenuation properties and site amplification. The retreived source functions will be used for an in-depth study of the source scaling characteristics. Furthermore, all KiK-net stations are additionally equipped with a borehole sensor, allowing for a direct comparison between GIT site amplification functions and the results from consideration of surface/borehole sensor pairs.

Another dataset of interest is the sequence of small earthquakes in Belgium southeast of Brussels, which started in July 2008 and includes earthquakes with magnitudes as small as 0. In collaboration with the Royal Observatory of Belgium (ORB), a spectral study of the ground motions recorded by a mobile network as well as permanent stations in Belgium is underway.