The history of seismological measurements in Luxembourg goes back to 1967, when the first seismological station became operational in the casemates of the City of Luxembourg, installed by Johnny Flick in collaboration with the Royal Observatory of Belgium. In 1975, a short-period seismic station was installed in the underground laboratory in Walferdange, and two further stations were added in Vianden and Kalborn in 1989 and 1992, respectively. In the framework of the GEOFON programme of the GFZ German Research Centre for Geosciences, a broadband station was installed in the underground laboratory in 1994.

Today, ECGS operates two seismic networks, in collaboration with several international partner institutions. The first is designed to monitor seismic activity in and around Luxembourg, while the second one, operated in close collaboration with local institutions1, is dedicated to the seismic surveillance and scientific research of the Virunga Volcanic Province in eastern Democratic Republic of the Congo. All seismic stations transmit their data in real-time. Below, we provide a short description of the networks as well as access to the real-time status information and live seismograms. 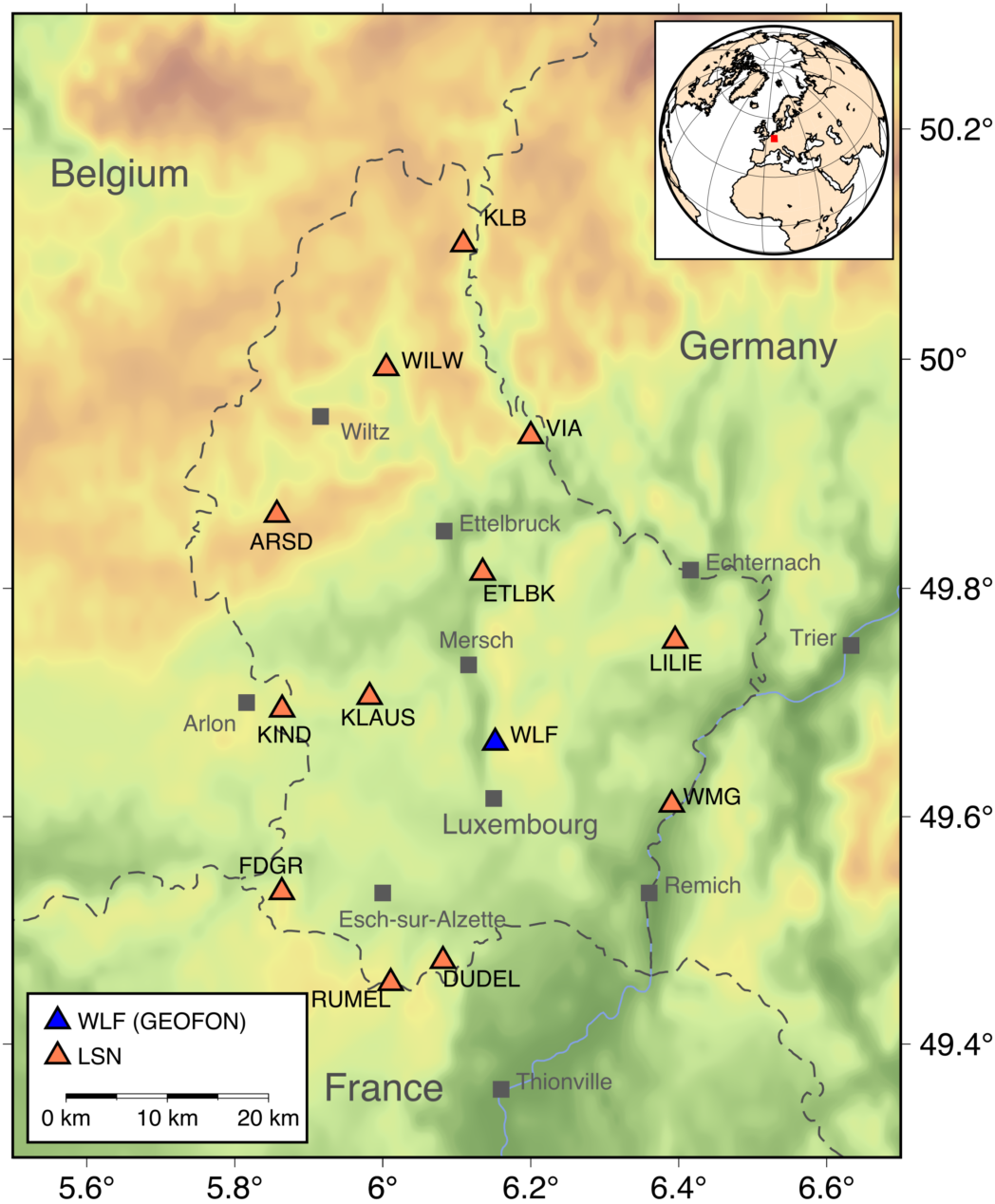 LuxSNet was developed starting from the early sites of Walferdange, Vianden and Kalborn, with the intention to design a network adequate for the monitoring of potential seismic activity in Luxembourg and its surroundings. In addition, the LuxSNet seismic stations also register the seismic waves generated by major earthquakes around the World.

LuxSNet currently consists of thirteen broadband seismic stations. The broadband stations are equipped with Streckeisen STS-2 (station WLF), Guralp CMG-3ESPC and Nanometrics Trillium Compact sensors. All data from LuxSNet are transmitted in real-time to the ECGS data center located in our office building in Walferdange using a cellular network system. Some of the sites were first used in a temporary deployment carried out in collaboration with the Karlsruhe Institute of Technology (KIT) in the framework of the project LUXBB. These sites have now been re-occupied with long-term deployments of ECGS-owned instruments.

The Kivu Rift region lies in the bordering region between the Democratic Republic of the Congo (DRC) and Rwanda in central Africa. This region is home to two of Africa’s most active volcanos, Nyiragongo and Nyamulagira, and threatened by an extraordinary combination of natural hazards (volcanic eruptions, earthquakes, landslides, etc.). Despite a scientifically unique setting and high hazard level, very limited and intermittent monitoring infrastructure existed in the region until recently, largely due to recurrent conflicts and ensuing the difficult working conditions in the area.

Over the past years, a consortium of Belgian and Luxembourgian scientists, in collaboration with local partners from DRC, Rwanda and Burundi, continuously developed a dense broadband seismic (KivuSNet) and GNSS (KivuGNet) network in the region. KivuSNet is composed of 18 broadband seismic (Guralp CMG-3EPSC and Nanometrics Trillium Compact sensors) and three three-element infrasound arrays, while KivuGNet encompasses 16 GNSS stations, mostly co-located with seismic sensors.

Real-time data streams were telemetered to the ECGS data center in Luxembourg and shared in real-time with the colleagues of the Goma Volcano Observatory in Goma and the Rwanda Natural Resources Authority in Kigali. These networks thus contributed directly to the surveillance activities of these hazardous volcanoes, while at the same time providing a unique dataset for scientific studies. These scientific activities were carried out through a range of dedicated projects and provided significant contributions to the improvement of our understanding not only on this specific volcanic system, but also on volcano-tectonic processes in general. More information on the Kivu Rift region and these projects can be found on the Virunga Volcanoes website.

Please consult the following papers for further information on KivuSNet and KivuGNet:

When clicking on the station code of the desired station in the left-hand column, a vertical component seismogram of the last 24 hours will be shown. All live seismograms are filtered with a WWSSN short period filter. A guide for the interpretation of the seedlink status information of this table can be found here.